Those who watched TV in the early 80’s might remember a show that aired for three years called the “Greatest American Hero.” The show’s theme song, “Believe it or Not” remains one of the most popular theme songs to this day, having been prominently featured in the Seinfeld TV show and even one of my favorite movies of 2005, 40 Year Old Virgin. 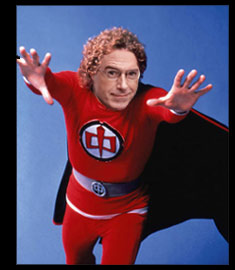 Who’s walking on air now? Stephen Colbert, of course. His mass popularity among bloggers has prompted a linking campaign, naming him the Greatest Living American.

Let’s take a moment to decide whether or not this is true. In 2005, the Discovery Channel ran a feature series called “Greatest American“. Going through their list one-by-one, I searched for the top-rated living American:
1) Ronald Reagan (dead)
2) Abraham Lincoln (dead)
3) Martin Luther King, Jr. (dead)
4) George Washington (dead)
5) Ben Franklin (dead)
6) George W. Bush
..
What? Dubya? You gotta be kidding me. Stephen Colbert makes a much better Greatest Living American. Only Colbert knows how to drop bombs (Google Bombs) while maintaining the popular vote (links) among web savvy Americans. If Dubya really used “The Google“, he’d understand what makes him a “miserable failure” and why is being named the “Greatest Living American.”

Note: Just a couple days after the linking began, Colbert ranked #1 in Google for Greatest Living American. Google’s link bombing algorithm has failed to catch this one so far. Two more Colbert bombs to watch are Giant Brass Balls and Truthiness.