We’ve all seen Google change their logo in recognition of holidays, but today marks the most dramatic change I’ve ever seen Google make to their homepage. Take a look at this screenshot (yes, this was Google’s actual homepage on March 29th): 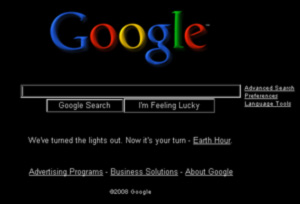 Turns out it was a gesture to raise awareness for Earth Hour – a worldwide conservation effort where everyone turns off their lights at 8pm to 9pm on March 29th. Not sure if it will save much energy, though it probably serves as a visual indicator of those participating (having people turn off their TVs or computers from 8-9pm would probably conserve more energy).

I find the first paragraph comical because it is almost a direct stab at Blackle.com (a customized black version of Google which claims to have saved 536,046.240 Watt hours):

“[in regards to the one-day only black version of Google]… As to why we don’t do this permanently – it saves no energy; modern displays use the same amount of power regardless of what they display.”

Gotta love how Google tries to be different: once Google went black, it chose to go back.