To better explain Wired magazine’s reference to mike siwek lawyer mi searches, I created this experimental blog post. Wired’s excellent article on Google’s algorithm links off to the search phrase: “mike siwek lawyer mi”, which sends you off to Google’s search results page for that query.

The mike siwek search phrase was used as an example of how Google is superior to Bing. Here’s what wired wrote:

The top result connects to a listing for an attorney named Michael Siwek in Grand Rapids, Michigan. It’s a fairly innocuous search — the kind that Google’s servers handle billions of times a day — but it is deceptively complicated. Type those same words into Bing, for instance, and the first result is a page about the NFL draft that includes safety Lawyer Milloy. Several pages into the results, there’s no direct referral to Siwek.

The ironic part is that everyone who is reading the article gets a Google search page that is in no way superior to the Bing because the results have been flooded with coverage of the newly popular search.

Take a look at the current Top 10 Results for a “mike siwek lawyer mi” Google search:

Of course, this isn’t fair to Google as the results when Steven Levy was writing the article were probably completely different. However, you would expect Mike Siwek’s site to show up shortly past the media mentions. Not so. Mike’s official law practice site didn’t show up until result 110 on page 11 of Google’s search results–a place where few searchers would dare take the time to navigate to and if they did find it, the listing description doesn’t even mention Mike Siwek, so it probably wouldn’t get clicked on:

The fact that this listing is so buried leads me to believe the search engine result that Google’s engineers were so proud of was result 4 that I list above, which is simply an address database site that is borderline spam and riddled with Google ads. 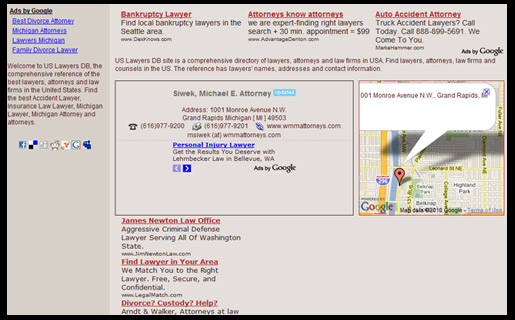 I count 28 different Google adsense ad listings if you include the next ads arrow tabbing, or 11 without the tabbing. No wonder Bing didn’t want to list this page! The only thing that is slightly impressive about this search is that Google thought to replace Mike Siwek with Michael Siwek.

I don’t mean to beat up on Google too much. I could certainly come up with many examples where Google’s algorithm is superior to Bing, but as an SEO consultant who is paid to constantly monitor the ugly flaws of search engine algorithms, I find this example of “Google’s algorithmic dominance” humorous & worry about the simple mindedness of Google’s top engineers when it comes to evaluating improvements in their algorithm.